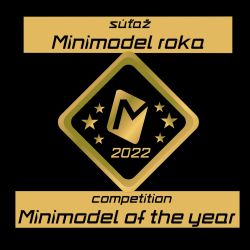 voting in the second year of the competition for the best model of the year has ended. I must state that we were very positively surprised by the participation in the competition. 15 contestants applied by the deadline, one modeler sent his photos after the deadline for applications and therefore we did not include him in the competition. Voting was public and 696 voters cast their votes. Personally, I have to say that more than eighty percent of the submitted models were, in our opinion, at a high level in terms of the quality of gluing, retouching, and processing of details.

The vote was as follows:

239 votes went to the Peugeot Boxer model from modeler Artem (due to the simplicity of the model, it was not possible to objectively compare the model with far more demanding and complex models, so we finally decided to put this model in a separate category)

In the category of simple models:

In the category of complex models:

The organizers of the competition also decided to award the best model award to Jiří Lasák for the Škoda ŠT 180 model with interior.

We thank all participants and congratulate the winners. We are looking forward to seeing you in the next edition of the competition for the best model of the year, most likely with a revised model rating system.