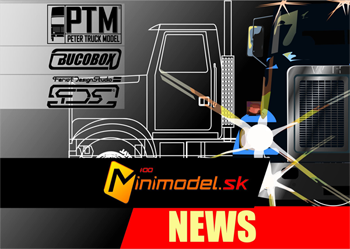 Advent is running at full speed and we are not idle either, even in the 50th week we have some news for you.

In addition to the fact that models in the Advent calendar are gradually appearing to us, we have prepared for you a smaller Saint Nicholas surprise in the form of the Dodge Charger R / T model from 1970 in the Nascar version.

Thanks to Frantisek Behounek and Kamil Stol , other models from Technik were uploaded to the web, so you can download models Robur, PT 12, Steyr Pinzgauer in the version of military ambulance or aircraft tractor Tatra Semex.

In addition, it is time to publish models from another author whose models we would like to publish by the end of next week.

From the FDS Model here we have models Skoda Felicia in several versions of car such as convertible , station wagon and hatchback as well as two versions of rally cars.

So do not hesitate to pull the glue.